IT'S HERE! THE STEN OMNIBUS #3

*****
PLUS!
CLICK HERE TO GET THE FIRST STEN IN 20 YEARS
STEN AND THE MUTINEERS 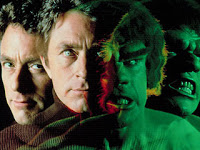 To understand The Incredible Hulk you have to first know that everybody on the show was nuts. Some were nice nuts. A few, not so nice. And others bounced back and forth like green balls of silly putty with no notice whatsoever.

It also helps to understand that the very premise of the show was schizoid, with this wimpy little doctor-type guy (played by Bill Bixby) transforming into a big green monster guy (played by Lou Ferrigno) when somebody kicks sand in his face and pisses him off.

Put another way, scripting for the Incredible Hulk was like writing for Kabuki theater. As Chris said, "one frigging thing out of place and everybody and everything goes apeshit."

The writing experience could be frustrating, agonizing and drive you just plain bonkers. On the other hand, of the hundred and fifty odd shows Chris and I worked on, it was one of the most fun and satisfying.

Once you got the formula down pat, you could write just about anything you wanted. More importantly, what you wrote went on the screen, so you didn't hesitate to open up and address broader themes than one might expect in a show about a comic book character. Things have changed since those days when you had a network censor hanging over your shoulder and I'm glad of it.

It was a bit like the old Black Mask Magazine days, where some of the 20th Century's great writers, like Chandler and Hammett, practiced and perfected their art and still kept the mag's thrill-seeking editors and readers content.

Created by Stan Lee and his buddies back in his Marvel Comic days, The Hulk was turned into a long-time hit TV series by Ken Johnson, who would go on to create top SF shows like V and Alien Nation.

The premise of the comic book and the TV series were different in many ways, but the important thing is that the Hulk is big and green in both venues.

Although it should be said that Kenny at first wanted to make the guy red - I don't know why - but was overruled by Stan Lee. Also, Stan's comic book Hulk could (sort of) talk, but Kenny's could only roar. (Roars provided by Ted Cassidy, then Charles Napier). In Stan's version, the Dr. Jekyll-like character was named Bruce Banner, in Kenny's it was David Banner. 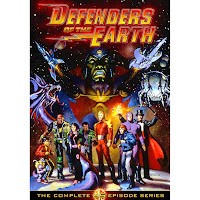 Later, when we wrote a couple of scripts for Stan's "Defenders Of The Earth" series, he told us that the guys in the Black Tower thought "Bruce" sounded too gay and made Kenny change it.

With that wry grin of his in place, Stan noted that it was the handsome young David with the slingshot who had a mad affair with King Saul, and not a guy named Bruce, but what the Hades, maybe the Black Tower boys knew something he didn't.

Another bit of trivia: Arnold - the ex-Governator - Schwarzenegger supposedly first read for the part but was rejected for being too short.

Kenny's main man on the show was the late Nick Corea (1943-1999), one of the best sheer story talents in the business. He was a master at adding interesting twists and turns and inspiring people to put real substance into their stories.

Added to this brew were Karen Harris and Jill Donner (Jill Sherman when we first met) - a writing team when we met them - and Andy Schneider.

Over several seasons, Chris and I wrote multiple episodes of the Hulk - so many that some people thought we were on staff.

There were a lot of MisAdventures in between those encounters with the Hulk gang, so for clarity's sake (hah!) I'm going to tell what happened over several back-to-back chapters.

So stay tuned until next week Gentle Reader when I present:

NEXT: SHOWDOWN AT THE INCREDIBLE HULK:
CHRIS BRINGS A 'MACHINEGUN' TO THE MEET!

IT'S HERE!
THE STEN OMNIBUS #3
CLICK HERE TO GET IT 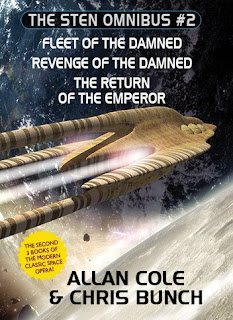 THE GRAND FINALE!
THE LAST TWO BOOKS IN THE SERIES
*****

Can't wait to read the blog each week to find out what happens next? No problem. Click the following link and buy the book.

Tales Sometimes Tall, but always true, of Allan Cole's years in Hollywood with his late partner, Chris Bunch. How a naked lady almost became our first agent. How we survived La-La Land with only the loss of half our brain cells. How Bunch & Cole became the ultimate Fix-It Boys. How an alleged Mafia Don was very, very good to us. The guy who cornered the market on movie rocks. Andy Warhol's Fire Extinguisher. The Real Stars Of Hollywood. Why they don't make million dollar movies. See The Seven Pi$$ing Dwarfs. Learn: how to kill a "difficult" actor… And much, much more.

Here's where you can buy it worldwide in both paperback and Kindle editions:

WANT A REAL TREAT?
Hear voice artist Colin Hussey's
Bring all the stories and people
To life in the audiobook version
Of My Hollywood MisAdventures.

Ever since my British publisher put all eight novels in the Sten series in three omnibus editions, American readers have been clamoring for equal treatment.

HERE IS WHERE YOU CAN BUY STEN IN ALL ITS VERSIONS:  PAPERBACKS, OMNIBUS EDITIONS,
E-BOOKS, AND AUDIOBOOKS. ALSO, SAMPLE CHAPTERS  AND A RUNDOWN
ON WHAT THE SERIES IS ABOUT

NEW! STEN AND THE MUTINEERS AUDOBOOK
ONLY $4.99 AT AUDIBLE.COM! CLICK HERE.

THE TIMURA TRILOGY: When The Gods Slept, Wolves Of The Gods and The Gods Awaken. This best selling fantasy series now available as trade paperbacks, e-books (in all varieties) and as audiobooks. Visit The Timura Trilogy page for links to all the editions.

NEWLY REVISED KINDLE EDITIONS OF THE TIMURA TRILOGY NOW AVAILABLE. (1) When The Gods Slept;(2) Wolves Of The Gods; (3) The Gods Awaken.

THE WARS OF THE SHANNONS

A NATION AT WAR WITH ITSELF: In Book Three Of The Shannon Trilogy, young Patrick Shannon is the heir-apparent to the Shannon fortune, but murder and betrayal at a family gathering send him fleeing into the American frontier, with only the last words of a wise old woman to arm him against what would come. And when the outbreak of the Civil War comes he finds himself fighting on the opposite side of those he loves the most. In The Wars Of The Shannons we see the conflict, both on the battlefield and the homefront, through the eyes of Patrick and the members of his extended Irish-American family as they struggle to survive the conflict that ripped the new nation apart, and yet, offered a dim beacon of hope.
LUCKY IN CYPRUS:

A True Story About A Boy,
A Teacher, And Earthquake,
Some Terrorists And The CIA

LUCKY IN CYPRUS is a coming-of-age story set in the Middle East during the height of the Cold War. An American teenager – son of a CIA operative – is inspired by grand events and a Greek Cypriot teacher.

He witnesses earthquakes and riots and terrorist attacks, but in the end it is his teacher’s gentle lessons that keep him whole.

Here's where to get the paperback & Kindle editions worldwide:

In The U.S.
In Canada
In The U.K.
In Germany
In France
In Spain
In Italy
In Japan
Here's the U.S. Kindle edition
Here's the Nook Book edition
All E-Book Flavors

Here's what readers say about Lucky In Cyprus:
*****

NEW: THE AUDIOBOOK VERSION OF

What if the Cold War never ended -- but continued for a thousand years? Best-selling authors Allan Cole (an American) and Nick Perumov (a Russian) spin a mesmerizing "what if?" tale set a thousand years in the future, as an American and a Russian super-soldier -- together with a beautiful American detective working for the United Worlds Police -- must combine forces to defeat a secret cabal ... and prevent a galactic disaster! This is the first - and only - collaboration between American and Russian novelists. Narrated by John Hough. Click the title links below for the trade paperback and kindle editions. (Also available at iTunes.)

A novel by Allan and his daughter, Susan

After laboring as a Doctors Without Borders physician in the teaming refugee camps and minefields of South Asia, Dr. Ann Donovan thought she'd seen Hell as close up as you can get. And as a fifth generation CIA brat, she thought she knew all there was to know about corruption and betrayal. But then her father - a legendary spymaster - shows up, with a ten-year-old boy in tow. A brother she never knew existed. Then in a few violent hours, her whole world is shattered, her father killed and she and her kid brother are one the run with hell hounds on their heels. They finally corner her in a clinic in Hawaii and then all the lies and treachery are revealed on one terrible, bloody storm- ravaged night.

BASED ON THE CLASSIC STEN SERIES by Allan Cole & Chris Bunch: Fresh from their mission to pacify the Wolf Worlds, Sten and his Mantis Team encounter a mysterious ship that has been lost among the stars for thousands of years. At first, everyone aboard appears to be long dead. Then a strange Being beckons, pleading for help. More disturbing: the presence of AM2, a strategically vital fuel tightly controlled by their boss - The Eternal Emperor. They are ordered to retrieve the remaining AM2 "at all costs." But once Sten and his heavy worlder sidekick, Alex Kilgour, board the ship they must dare an out of control defense system that attacks without warning as they move through dark warrens filled with unimaginable horrors. When they reach their goal they find that in the midst of all that death are the "seeds" of a lost civilization.
CLICK HERE TO GET THE E-BOOK
CLICK HERE TO GET THE AUDIO

TALES OF THE BLUE MEANIE
NOW AN AUDIOBOOK!

In the depths of the Sixties and The Days Of Rage, a young newsman, accompanied by his pregnant wife and orphaned teenage brother, creates a Paradise of sorts in a sprawling Venice Beach community of apartments, populated by students, artists, budding scientists and engineers lifeguards, poets, bikers with  a few junkies thrown in for good measure. The inhabitants come to call the place “Pepperland,” after the Beatles movie, “Yellow Submarine.” Threatening this paradise is  "The Blue Meanie,"  a crazy giant of a man so frightening that he eventually even scares himself.
CLICK HERE TO BUY THE PAPERBACK & KINDLE
CLICK HERE TO BUY THE AUDIOBOOK

Allan Cole
ALLAN COLE is a best-selling author, screenwriter and former prize-winning newsman. The son of a CIA operative, Cole was raised in Europe and the Far East. His work includes the landmark science fiction series, Sten, which he wrote with the late Chris Bunch; The Timura Trilogy, The Far Kingdoms Series, Lucky In Cyprus, My Hollywood MisAdventures, Tales Of The Blue Meanie, A Reckoning For Kings, and many more. For details see his bio at www.acole.com or see his entry at the Internet Movie Data Base. (IMDB.com),as well as Wikipedia.com